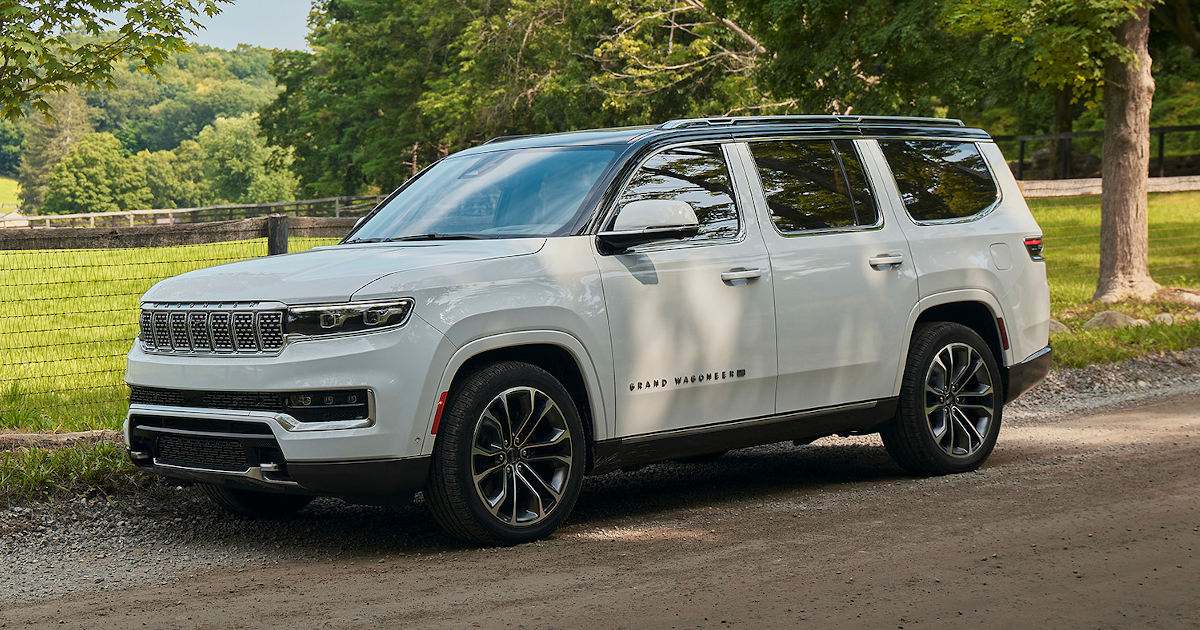 It’s been three decades since Jeep ceased production of its Grand Wagoneer, an oversized, wagon-esque SUV that mixed family-hauling with capability and luxury.

Now Jeep is pulling the curtain off a complete resurrection of the nameplate that offers two different models with varying aesthetics and equipment: the Wagoneer and the Grand Wagoneer. Jeep also is betting that the more upscale of the two—the Grand Wagoneer, a full-size SUV that requires a near six-figure buy-in—will be able to compete with the likes of the Cadillac Escalade, Lincoln Navigator and Mercedes-Benz GLS.

The full-size luxury SUV segment is slight in sales volume but high in per-unit profit and getting a seat at the table is no easy task. However, what the 2022 Grand Wagoneer offers that none of the current entries can (aside from the venerated Jeep name) is an intangible warm, friendly essence. It’s luxurious without being stuffy, tech-laden without being clinical and comfortably elegant.

To be clear, the Wagoneer and Grand Wagoneer are identical in length and wheelbase. The primary differences are both cosmetic and mechanical: The quality of materials, exterior styling cues, available tech and powertrain features vary between models. That and the approximate $29,000 delta that separates the starting price of the Grand Wagoneer ($88,995) from the Wagoneer ($59,995), including a $2,000 destination fee.

The Jeep Grand Wagoneer upscale looks include a more sophisticated grille design, chrome around the windows, a black-painted roof and stunning LED lighting. Of particular note is the grille, which retains the requisite Jeep seven-slot motif but is slightly less imposing than the upright bedazzled chrome favored by most segment rivals.

In New York City, where Escalades and Navigators have long since replaced the traditional town car sedan as the car service transports of choice, the top-of-line Grand Wagoneer Series III makes its case draped in black exterior finish and honey-hued Tupelo leather interior mixed with genuine wood accents, a combination that resembles the cigar room at The Union Club on East 69th Street. The vibe is warm and exclusive but not intimidating.

This version of the Grand Wagoneer costs a cool $108,585, including destination. It also has the $1,995 Customer Preferred Package that adds rear-seat entertainment with dual 10.1-inch screens and USB video port. The “Diamond Black Crystal Pearl” paint is an extra $595.

No vehicle measuring 214.7 inches long and 83.6 inches wide can be described as nimble in city traffic, but the Grand Wagoneer’s agility is like an NFL defensive lineman. It can cut and run when it sees a hole, but most people just get out of its way. (For comparison, the Cadillac Escalade measures 211.9 and 81.1 inches although the longer Escalade ESV stretches to 227 inches.)

Much of the credit for its spry moves go to the standard 6.4-liter V8 engine and eight-speed automatic transmission plucked from Stellantis (formerly Fiat Chrysler) empire. Rated at 471 horsepower and 455 pound-feet of torque, it easily motivates the Grand Wagoneer’s 6,420-pound body. It weighs in about 600 pounds heftier than the Escalade ESV but has a 51-horsepower advantage over the Caddy’s 420-horsepower 6.2-liter V8.

The top-tier Grand Wagoneer Series III includes nearly 45-inches of HD screens across the instrument panel. (The Escalade only offers 38-inches of screen area, but it’s contoured whereas the Grand Wagoneer’s screens are flat.) A 10.25-inch section of the screen located directly in front of the passenger can display navigation, exterior vehicle cameras or entertainment via an HDMI input or the integrated Amazon Fire app. The dedicated screen enables the front-seat passenger to assist with navigation and infotainment chores so the driver can focus on the road ahead. The vaunted 1,250-watt MacIntosh audio system that comes standard across the line truly delivers on the sonic promise of its esteemed brand name.

The 12-inch center stack runs Uconnect 5 software with bold and clear navigation graphics. One hiccup on a parkway in Westchester County, New York caused the screen to lose directional instructions and imagery; Jeep said an update is due shortly, a prescient action as it claims the northeast region is its strongest market.

All three rows offer plenty of hip, leg and headroom and provide that elusive combination of support and comfort that makes long drives less tiring. The 24-way adjustable front seats are controlled by knobs on the doors. The pedal height also can be customized for taller drivers. (Seat controls on the more modest Wagoneer are still mounted to the seat base.)

Jeep makes some bold declarations about interior volume, claiming best in class in a number of crucial metrics. Specifically, 42.7-inches of second-row legroom, 36.3-inches of third-row legroom and 39-inches of headroom in the third row. The long-wheelbase Escalade ESV measures 41.7, 36.6 and 38.2 inches in the same categories. The Lincoln Navigator L offers 41.1, 42.3 and 37.4 inches. The Grand Wagoneer loses 0.3-inch of an inch in third-row legroom to the Escalade ESV, but trounces both otherwise. Even more impressive, the Grand Wagoneer’s 123-inch wheelbase gives up 11 inches to the Escalade ESV and 7.5 inches to the Navigator L.

The Grand Wagoneer makes those impressive legroom numbers by borrowing from the cargo hold capacity. Offering 27.4 cubic-feet behind the third row and 64.5 behind the second row, it doesn’t come close to the comparatively massive 42.9 and 81.5 cubic-feet offered by the Escalade and 34.3 and 73.3 cubic-feet of by the Navigator L. Put it up against the standard length variants, however, and it beats both handily, the Escalade providing a comparatively scant 25.5 and 63 cubes of cargo area while the Lincoln offers just 19.3 and 57.5 cubic-feet.

Highway travel is predictably serene, and the hands-free active driving assist works with the same deft speed and steering control as it did in the 2021 Grand Cherokee L. However, unlike the Escalade’s Super Cruise “eyesight” system, the Grand Wagoneer requires the driver to contact the steering wheel every few moments.

Despite its sophisticated suspension system, when equipped with the 22-inch wheels (20-inchers are standard on the base Grand Wagoneer) and 285/45 Goodyear all-season touring and performance tires, a surprising amount of harsh impacts find their way into the Grand Wagoneer’s cabin. The structure is rattle-free and the impacts muted, but significant road imperfections make themselves known in town and on the highway.

Unsurprisingly, fuel economy doesn’t top the list of the Grand Wagoneer’s favorable traits. The EPA rates it at 13 mpg in city driving, 18 mpg on the highway and 15 mpg combined. Cylinder deactivation and a fully disconnecting front axle help some, but even the Escalade with the big 6.2-liter V8 manages an EPA rating of 16 mpg in city. The Lincoln Navigator is rated to achieve 17 mpg city.

It’s unlikely buyers in the class will fixate on fuel economy ratings, but some will pay attention. In a day of combined driving we observed 15 mpg; considering its 26.5-gallon fuel tank, that works out to a range of about 397.5 miles.

The Grand Wagoneer ships solely with Jeep’s Quadra lift air suspension. It uses airbags at all four corners in place of traditional coil springs to improve the ride and handling, reduce body lean and raise its standard 8-inch ride height up to a maximum of 10 inches of ground clearance, which aids in its water fording depth of up to two feet.

Jeep also had a few standard Wagoneers on hand, primarily for use on a short section of specifically prepared rocky off-road terrain. Equipped with the standard 392-horsepower 5.7-liter V8 and eight-speed automatic and, crucially, 18-inch wheels with 275/65 Firestone Destination AT2 All-Terrain tires as well as an electronically locking 3.92:1 rear differential. Air suspension is optional.

With the drive mode set to “Rock” and the air suspension at full lift, the Wagoneer easily rolled over the obstacles, including a deeply rutted crevice that tilted it 26-degrees to the left as it inched along. Rest assured, this version of the new Jeep is still a Jeep.

The Grand Wagoneer, which aspires to a higher level of comfort and style versus off-road ability with its the larger high-style aluminum wheels and less aggressive rubber, could achieve the same success as its Wagoneer sibling if equipped with the same tire and wheel combination as the frame and suspension are identical.

It’s worth noting that in this configuration, the regular Wagoneer is EPA rated for 15 mpg city, 20 mpg highway and 17 mpg combined. Opting for two-wheel drive bumps the numbers to 16 mpg city, 22 mpg highway and 18 mpg combined. These are incremental gains over the Grand Wagoneer but considering the more than 20,000 miles buyers of this vehicle class often accumulate each year, it could be significant. Fittingly, the Grand Wagoneer is only available with the larger 6.4-liter.

The Grand Wagoneer, Jeep’s largest and most luxurious SUV, is finally headed to showrooms nearly 12 years after then FCA CEO Sergio Marchionne announced its forthcoming return. In that decade the world has changed significantly, including complete redesigns of its chief competitors, the Cadillac Escalade and Lincoln Navigator.

Wisely, Jeep has taken another path to arrive at the same destination. Instead of barging headlong into the chrome-festooned marketplace, the brand focused on blending quality materials with technology and contemporary color schemes with a hint of retro styling first and foremost.

If showing off is more your thing, well, you know where to go.